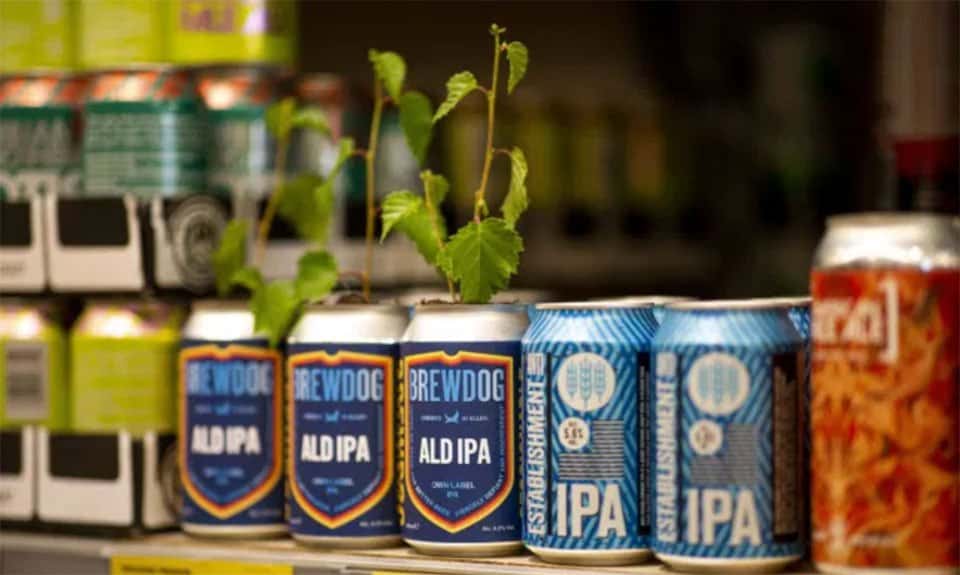 With political parties condemning opposition Coronavirus tactics left-right-and-centre, and US Presidential Candidates openly sniping at one another from the campaign debate podium, it comes as a breath of fresh air to learn that two of our well-known consumer brands have also been battling away, but with the power of humor as their weapons of choice.

By playing it cool and using social media to maximize exposure, Aldi and Brewdog have been bantering over a cheeky copycat conundrum of late, which started with Aldi launching a beer that held a striking resemblance to Brewdog’s flagship Punk IPA beverage.

Branded “Anti-Establishment IPA”, Aldi’s tipple received a 3.2 rating on review site Untappd, and caught Brewdog’s attention when a shopper Tweeted about the can, claiming it was “legendary”.
Rather than embarking on a slanging match of solicitors’ correspondents (although it should be noted that Brewdog has dealt with copyright issues via legal routes in the past), the craft brewery founder James Watt gently retaliated over social media, detailing the release of a new “Aldi IPA”.
A mock-up for a “Yaldi IPA” beer can soon followed (although the “Y”, was later dropped after it was pointed out that a smaller independent brewer already makes a beer called Yaldi).
The next twist came when Aldi’s Twitter account management team suggested that the supermarket might list Brewdog’s Aldi IPA.
Brewdog claims Aldi’s buying director has been in touch about the listing, while rival supermarket Tesco also wants to put the beer on its shelves.

If this slightly genius, unplanned product campaign is successfully pulled off, then what an interesting outcome to a plagiaristic situation – during times when aggression and blame-based finger pointing appear to be the order of the day.
It shows a shimmer of humorous humility that both companies are using their social media expertise to settle a difficult situation, which in turn rewards them with a boost in company publicity and product awareness.
It’s unlikely that anyone reading the story is left with a sense of ‘news anxiety’, or a feeling that controversy or conflict can only be dealt with using an onslaught of hostile behaviors. There’s so much of that in the news at present anyway, with constructive contribution being drowned out by a level of imbalanced criticism that can’t be good for readers’ health. So it’s understandable that hearing a report of companies managing discord – using what could be described as, ‘more intelligent’ tactics – almost lifts the spirits!
I think we’d all benefit from seeing a little more of this reporting approach in our social media streams and through broadcasted news as a means to get us through the dark days. It’s considered, rather than instant. It’s effective, rather than reactionary. It’s clever, rather an aggressive. And let’s face it, it’s funny.

In recent years, it’s become traditional for the John Lewis Christmas advert to herald the beginning of the UK’s festive season, together with the launch of a shopping spree capable of significantly...
Read More

With political parties condemning opposition Coronavirus tactics left-right-and-centre, and US Presidential Candidates openly sniping at one another from the campaign debate podium, it comes as a...
Read More

Cost effective, design focused, results driven: Is it time to bring Email Marketing into the mix?

With the events of recent months leading us to increasingly perform our business ventures at a screen - whether desk based or mobile – could it be time to consider upping activity on the popular...
Read More

How Covid-19 could change the view from our media window

With the media landscape changing in front of our very eyes at present, it will be interesting to see just what ‘post-covid’ social, media and online information delivery will be like, as the...
Read More

Right now, (end of May 2020), we're more than two months in to the Covid-19 episode of lockdown and from a media point of view, it’s been interesting to see how the advertising messages we’ve been...
Read More

Keeping the wheels in motion

Our office doors remain closed for the time being, as we work together to keep families, communities and clients safe during the COVID-19 pandemic - however we’re still open for business and are...
Read More

The changes in voice, tone and message that have occurred across creative marketing campaigns since the Coronavirus began to affect the UK have been dramatic…and instant, with an influx of companies...
Read More

At the agency (which is currently split between our various homes), we’re taking personal and professional notice of the campaigns companies are putting out there to guide us during this constantly...
Read More

The way that the Covid-19 pandemic is affecting us - and the information we’re receiving to respond to the crisis - changes daily. So too do the advertising routes companies are adopting to adapt...
Read More

So, home based workers of the UK, how have you found the first fortnight of doing your job from your kitchen/bedroom/garage? We’re now entering week three, with the McConnells’ team doing what they...
Read More
Our website uses cookies. We'll assume you're ok with this, but you can opt-out. Cookie settingsACCEPT
Privacy & Cookies Policy