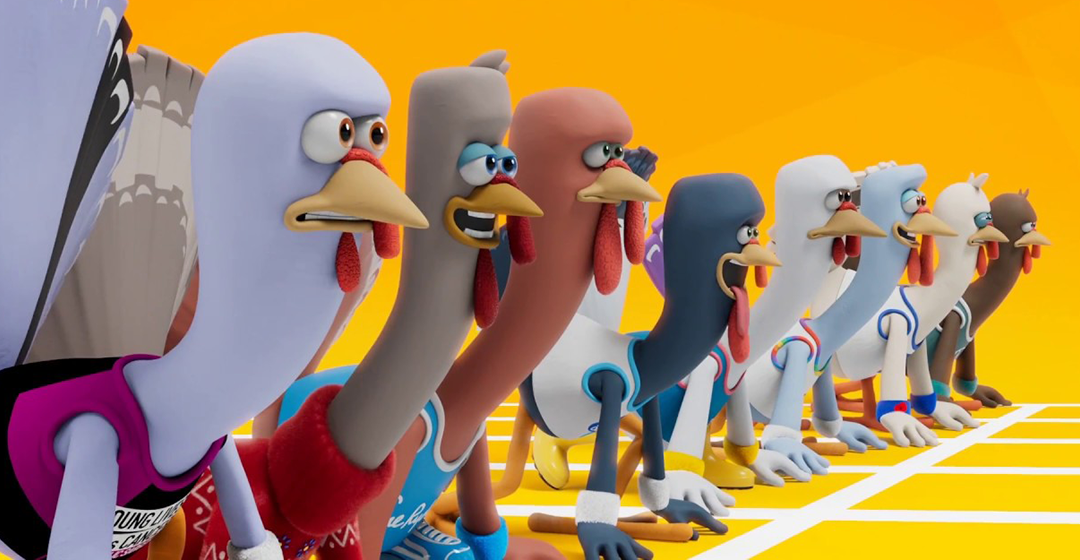 PayPal and Aardman Animation have got together this Christmas to create a CGI cartoon short in which an Aardmanised Scarlett Moffatt from Gogglebox trains a flock of Turkeys for eight charitable causes.

In the animation, eight turkeys, each representing a different charity, take part in an animated race powered by online donations and screened via an exclusive broadcast partnership with Channel 4.

In the first film, Moffat’s character can be seen ‘in training’ with her avian teammates, encouraging viewers to donate to the cause of their chosen charitable turkey.

Alison Sagar, chief marketing officer and head of consumer at PayPal UK, said: “With Turkey Dash, we wanted to show the power of online payments to do good. Last Christmas, more than a million people in the UK made a donation to their favourite cause with PayPal. This year, we want to encourage even more donations!”

Aardman director Darren Dubicki added: “Who doesn’t love the idea of animated turkeys? With Turkey Dash, we’re playing to the great British sense of humour we all share, while encouraging people to dig deep for a good cause. We’ll be working on the animation right up until race day, which will be a little nerve wracking!”

All donations received will be processed via PayPal’s Giving Fund, a non-profit body that harnesses technology to power charitable donations.

Thorntons has released its Christmas ad; this year in collaboration with an armed forces charity, Soldiers, Sailors, Airmen and Families Association (SSAFA), in an effort to raise public awareness of the organisation.

The campaign ‘Pass the Love On’, aired this week on Channel 4 during Gogglebox, and featured a young man on his way home for Christmas who on the way, buys a box of Thorntons Continental. We soon find out that the young man is a naval officer, home on leave and is meeting his fiancé’s family for the first time, when he plans to give them the Thorntons box.

As part of the partnership, 2% of all sales from the Thorntons Continental boxed product range, purchased in Thorntons owned stores in the UK and on the Thorntons website, will be paid in support of SSAFA.

Ian Tweedale, marketing director of Thorntons said: “There is a lot of excitement around Thorntons this Christmas; we recently launched our first concept store, as well as experiential activity across our retail estate, a new remastered Thorntons Continental range, new advertising and lots more – we are truly passing the love on.”

Sir Andrew Gregory, chief executive at SSAFA, added: “SAFFA is truly delighted to work with Thorntons this Christmas, to celebrate the service of men and women in the Royal Navy, Royal Marines, British Army, the Royal Air Force, and recognise the importance of the support given by their families.

“SSAFA’s longstanding commitment to excellence makes a partnership with Thorntons the perfect fit. With the support we are receiving from Thorntons and the awareness the campaign is creating, SSAFA will be able to continue to help those who are serving, or have served this Nation, and their families, when they need assistance.”

Santander chooses to put the brakes on Formula One sponsorship

Banking giant Santander has announced that after a run of seven years, it will not be extending its Formula One sport sponsorship.

Spanish media reports suggest that the bank will not be renewing its partnership with Ferrari from next season, which will see the vehicle manufacturer dealt a financial blow after earning €280m over the course of the sponsorship relationship.

The alliance between Ferrari and Santander was first formed in 2010, when the Spanish bank was run by F1 enthusiast Emilio Botín, however the Italian team haven’t won a single championship since 2007.

The bank is no run by Emilio’s daughter, Ana, and is reported to have turned down a Ferrari request to renew its run as primary sponsor for €40m – although it may yet opt to continue as a secondary sponsor.

Despite Ferrari’s lack of racetrack wins, Santander believes the sponsorship alliance has proven beneficial with the opinion that every Euro given to Ferrari has been returned and more.

Plans have not yet been revealed of how or if Santander will reallocate its marketing spend for next year, although the majority of its €450m marketing budget will continue to go to South American football team Copa Libertadores.